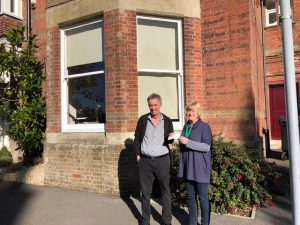 Former Mayor of Dorchester, Councillor Susie Hosford presented a cheque for £1250 to Dr Ian Stuart, founder of Cavernoma Alliance UK (CAUK) for the charity that was established in Dorchester in 2005.

CAUK aims to provide free support and information for all those affected by cavernoma including friends, family and carers. The charity now has over 2000 members in the UK and worldwide. The charity also funds research and works to raise awareness of this relatively unknown condition throughout the medical community and amongst the general public. More information can be found by visiting www.cavernoma.org.uk.

“It’s a pleasure to donate this money to such a worthy cause which works worldwide from its base in Dorchester. The funds were raised during my mayoral year at various events such as the Town’s Annual Maumbury Rings Music Day, organised by Dorchester Town Council and boosted with generous donations from local organisations including the Casterbridge Rotary Club, the Dorchester Rotary Club and the Durnovaria Silver Band.”

A total of £2500 was raised during Councillor Hosford’s Mayoral year which enabled the former mayor to also present a cheque for £1250 to the Dorchester, Sherborne and Districts & North Dorset Citizen Advice charity.