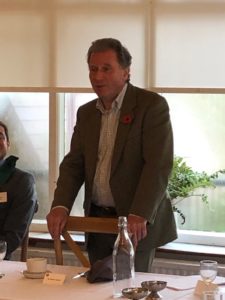 Sir Oliver Letwin said: “It’s important to recognise that there will be uncertainty once we have withdrawn from the European Union (EU) as the UK Government negotiates future trading agreements. The current agreement allows for a new trade agreement with the EU by the of 2020 at the earliest, or the end of 2022 if a mutual extension is agreed. Either scenarios are very ambitious.”

The next phase of Brexit is on hold until after the General Election on 12 December and will be dependent on which party gets elected. But whatever happens Sir Oliver stressed the importance of all sides to re-discover their capacity for compromise.

“We need enough will on all sides for people to compromise and this goes for the trade deals too,” said Sir Oliver Letwin.

The breakfast was held at Sunninghill Prep School in Dorchester that offers businesses and organisations rooms and spaces to hire.

Chamber president Steve Farnham presented Sir Oliver with a bottle of Fordington Gin as thanks for all his work and support for the West Dorset constituency over the years.

Many thanks to solicitors Blanchards Bailey for sponsoring the event.

Bookings are now being taken for the Good Causes breakfast on 19 November at the Shire Hall Historic Courthouse Museum, Dorchester.

Bookings can be made here. 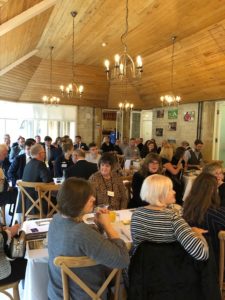