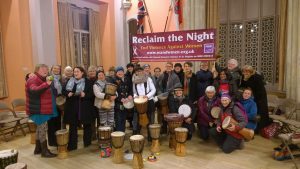 Everyone in Dorset is invited to join WAND for its annual Reclaim the Night event on Saturday 25 November  6.30-10.30pm at the Town Hall in Dorchester.

WAND – Women’s Action Network Dorset – is hosting the night to link in with “International End Violence Against Women Day” held each year on 25 November.

Tickets cost £3, to be bought on the door, and include a drumming workshop with the wonderful Organic Rhythm, a buffet supper and a charity auction.  The main event of the evening will be a short march through the Dorchester streets to ‘Reclaim the Night’.

A WAND spokesperson explained the rationale behind the event. “The march through the streets is our way of raising awareness of the vulnerability faced by many women through domestic violence and abuse, rape, and honour-based violence.  While the event has a serious theme, it’s a really fun evening.”

Some of the money raised from the auction will go to support the children of the West Dorset Woman’s Refuge. The remaining money will be going to The Shores (the Dorset Sexual Assault Referral Centre) in Bournemouth to support their valuable work.  Last year we raised over £700 at the event (including a couple of generous donations).

“It’s always a challenge to find the right words to talk about the Reclaim the Night in Dorchester. It is undoubtedly a very special night where united voices make a positive noise to say, ‘Enough is enough’ but I’d like not to have to write them at all. I’d love domestic violence to be a thing of the past, as would many other women in Dorset who are faced with a clear and present danger every day.

Tracey went on to say it would be remiss if she didn’t mention here that domestic violence also takes place to men and to the LGBTQ community too and that’s equally abhorrent, but the statistics show that these crimes are predominantly carried out on women, and Reclaim the Night puts a spotlight on that fact.

“Domestic abuse isn’t something that happens in other people’s neighbourhoods – it happens everywhere, it doesn’t give a jot about your place on the social spectrum, your income or race. It commonly takes place under people’s noses and when you have a perpetrator who is seemingly charming to the rest of the world, it can take all of your bravery to step forward and contact the police in a bid to escape it; thank heavens that we still have a refuge.

“Referrals to the Dorset police continue to rise,” explains Tracey adding that in 2016, they were the highest they’d ever been, but so were prosecutions and convictions.

“I have spoken with many women who have suffered the violent hand and/or vicious tongue of an abuser and I know that taking steps towards reporting a crime can be the most terrifying ones, but our police force now has specially trained officers dedicated to investigating domestic abuse offences and there’s a dedicated team who support those at high-risk. Figures for the first quarter of 2016 showed that out of all UK police forces, Dorset achieved the highest domestic abuse conviction rate in magistrate courts, at 87%.

“Saying NO to domestic abuse will eventually empower you and you might not necessarily see it at the time, but speaking out is really the only way to bring it to an end. Please consider coming to our Reclaim the Night event and joining the rising number of women and men who are all saying NO! We hope you can join us.”

WAND is again welcoming anyone who wishes to contribute towards ending violence against woman – so this will not be a female only event – it is open to everyone.

While WAND recognises that domestic violence doesn’t just affect women and that men can also be subjected to it, as a women’s organisation Reclaim is still focussed on support for women. So please come along to our friendly event which promises a fun evening despite its serious message.

For more information or if you would like to make a donation to the charity auction please contact or call 07956 896114.