Dorchester getting ready for next month’s Literary Festival

Members and guests to this month’s chamber breakfast meeting heard all about the forthcoming Dorchester Literary Festival.

Janet Gleason, festival director at the Dorchester Literary Festival, spoke about the great appetite people had in the region for literary events with last year’s event attracting over 3,500 people.

Now in its fifth year, the festival attracts important and significant authors across a variety of genres, including fiction, history, gardening and popular science. This year is no exception with writers such as Alexander McCall Smith, Prue Leith and Tracy Chevalier among the line up and events are held at the Corn Exchange, the Dorford Centre and Thomas Hardye School.

“The festival provides the opportunity for people to meet authors and authors to connect with their audience,” said Janet Gleason.

The breakfast, held at the Sun Inn, Dorchester, was attended by 60 members and guests.

The sponsor for this month’s meeting was video production company Pageant Productions. Gary Jarman, from the business, spoke of his plans to set up a film-making club for people with learning disabilities, where they will be able to learn film-making skills and share films throughout the local community. 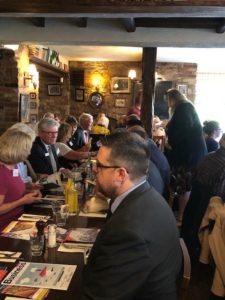 Next month’s business breakfast is an extended networking event with Lyme Regis Chamber of Commerce and Bridport Business on 8 October between 7.45am-9.30am at the Bridport and West Dorset Golf Club.